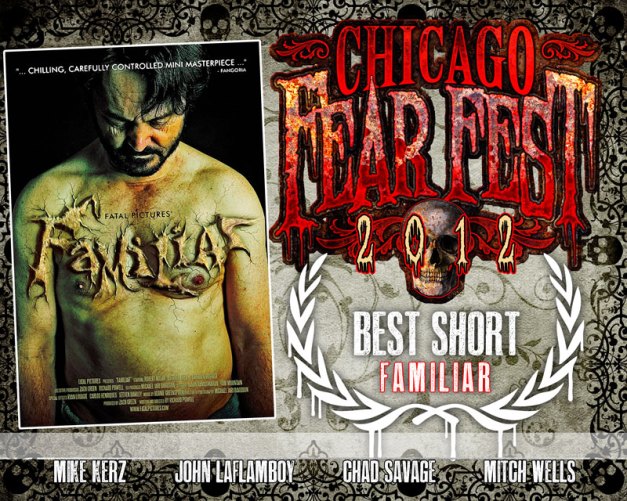 Sorry we haven’t posted lately folks. There seems to have been a bit of a technical glitch affecting all of our servers… Hmm…

Anyway, today we’re going to share an interview we recently conducted with ZACH GREEN (producer, editor and all round horror fan) you may remember him from our feature on the horror short FAMILIAR… If not click here for a refresher.

Tell us more about the festivals FAMILIAR has been screened at

There will be many more as the days come. Please check http://www.FatalPictures.com for all upcoming screening dates.

What is it about horror that you find so compelling?

I really love the emotion fear. I feel your most alive when you fear for your life, or if you are just really terrified. Ive gained a really big appreciation and love for the genre over the years.

Can you describe the auditioning process of your movies and how you ultimately choose the right actor to portray your protagonist?

Well myself and Richard will audition actors we think would be able to portray what we are trying to depict, and have them one by one come in and audition for the part, most likely we will video tape all the auditions, so we can go back and watch them over and over and ultimately decide who we feel is best.

Your popularity is constantly on the rise with more people becoming aware of your company and projects, but how hard was it to get where you are now?

Well thank you very much for those kind words. I dont really know where i am now, i just know im lucky enough to be a part of Fatal Pictures and to bring the world these great films myself and Richard create.

We recently reviewed your horror short Familiar, tell us, how is the feedback thus far?

The film is really getting some good praise by top critics and getting into great film festivals thus far, so i cant complain to much. I think its getting some great responses and feedback all around.

Tell us about the project you are currently working on?

I am currently still working on promoting Familiar and really getting it into the world. But the next film from Fatal Pictures will be our feature film debut. “WORM”.

What has been the most rewarding part of your career so far?

Some of the most rewarding parts to me are when im on set seeing the film starting to take form and starting to become a film, and also once the film is finished, being able to watch the film with an audience and seeing how they react to it, as well as of course watching it do very well weather its getting into film festivals or getting a great review.

Where can people find out more about Fatal Pictures and what you’re up too?

Any filmmakers that inspired you to get into the business?

I wouldn’t really say any one filmmaker/producer inspires me to do what I do, I just love the medium and love creating art for the rest of the world to see. There are many filmmakers and producers i think are awesome and do great work of course. I think Richards stories/scripts need to be told and produced.

And finally, who is your favourite horror icon?

Leatherface: From the Original Texas Chainsaw Massacre ‘1974. I think the character Leatherface is really terrifying and real. What to me makes him extremely scary is the fact he’s a real person.